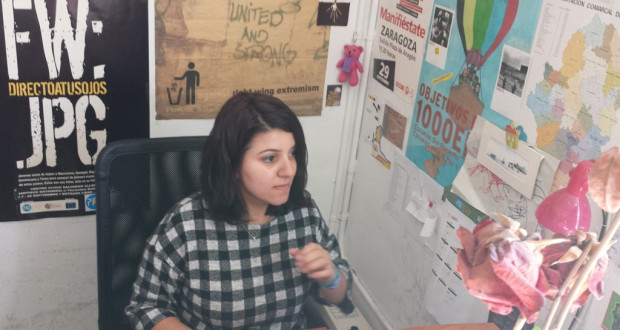 Ceren Gergeroglu, Coordinator of Assembly of Cooperation for Peace in Aragon (Spain)

Ceren Gergeroglu, Coordinator of Assembly of Cooperation for Peace in Aragon (Spain). She was born in Ankara and she studied International Relations at the Middle East Technical University. She lives in Spain since 2007.

Yes and no. To be able to say that someone knows the real life in somewhere, I think s/he should live there, talk a lot with people from there, take many taxis, loose her/himself in little streets in different cities of a country, not only in metropoles. Actually, it’s the only valid formula for many countries, cities… Moreover, there are many dynamics in Turkey that make this country special and it’s really difficult to interpret from Europe. Because of that, I think only journalists who have been in Turkey or have witnessed many things could make the real, true interpretations of these dynamics. However, from far away, depending on the translations and observations It’s difficult to claim that you know the real life in Turkey.

It would be useful for your daily work to get in contact with European journalists? To make your international information, would it be easier for your work to have video and audio tools about Europe?

Of course yes. Actually it’s our debt to be in touch not only with European journalists but also with all the journalist from all over the world. Because right now, we all have this oportunity thats to internet, thanks to social networks. If we are not in touch, it would mean automatically “ignorance” of what is going on around the world. And naturally it would be easier for everyones work having video and audio tools about Europe.

2015-05-04
indagando
Previous: Who is Who in the EU – Maja Kocijancic
Next: 10 television programs will show the European Union