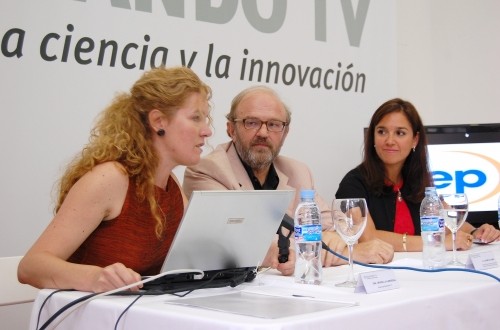 Madrid, September 2014.- Indagando TV is going to lead the AB-BILGI European project, framed in the EuropeAid Program, wich will be developed with Turkish journalists to disseminate the institutions, funds, programs and projects of the European Union and its presence in the everyday life of Turkish civil society. To be able to do it, Indagando TV will have Destan TV as a local partner.

The AB-BILGI project will begin in mid-October and will run for 15 months. During that time, it will work to raise awareness among Turkish media about the active presence of the EU on a daily basis of Turkish civil society, through cooperation projects, scholarships, European partnerships, new regulation rules, modernization directives, improvement of national and local infrastructures, new ways of participation and initiatives of the EU. In short, it is a project to inform journalists about the options offered by the EU for civil society, but also, how the European initiatives can directly benefit the population.

Through AB-BILGI project, the civil society and the Turkish social entities will be also reached in order to reduce the lack of knowledge about EU institutions, the policies and the social options offered through its cooperation and development programs.

To do so, Indagando TV and Destan TV will collaborate on the creation of professional networks; in the development of joint learning activities among Turkish and another from EU media; they will present the best practices and promote activities that can be innovative. The main actions of the AB-BILGI project will focus on training, entertaining and promoting, in order to do so, it has opted for media production and for editing 10 television programs. Through them the possibilities and opportunities EU will be displayed in different areas such as the environment, health, infrastructures and economics, among others. Additionally, social networks and the scope of Internet will be used so that contacts can be established between Turkish and European journalists and to generate new sources of information.

Furthermore, the project includes the organization of training sessions in seven regions of Turkey, aimed at journalists and civilians. It will be taught specific training about European programs and cooperation projects, as well as the opportunity to participate in transnational initiatives. The goal is to enable journalists to know further funding mechanisms of the EU and the priorities of European policies, so that they can inform and encourage Turkish social participation in the European initiatives.

The AB-BILGI project will count with the international consultans, experts in European programs such Santiago Algora and Christos Georgiadis . The first one will be responsible for the coordination and technical direction of the project, and both will be responsible for imparting the training activities. For dissemination and communication actions Indagando TV will work with the journalist Melania Bentué.

Indagando TV is an internet television channel dedicated to promote innovation, knowledge society and scientific and medical dissemination. Live broadcast television is directed to the general public. Their goal is to unite in the same media professionals of the technology, the environment, science, medicine, media communications, general public, scientific institutions, foundations and private companies.

2014-10-16
indagando
Previous: Turkish journalists will know the EU hand in glove with a Spanish project
Next: Give us your opinion