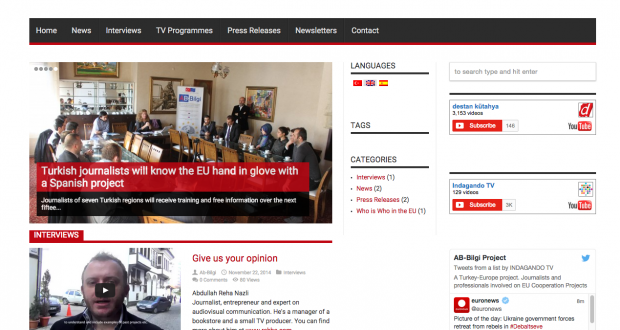 A communication frame 2.0 with all information to know step by step this initiative that will approach the European Union to Turkish journalists and citizens
Television programs, news, interviews, reports and newsletters will shape the website, with the social media created to establish networks between journalists and international cooperation experts

The AB-Bilgi European project launches its website. A meeting point in the Network to make easier the necessary information to know this European Union and the Turkish Government initiative, whereby journalists of the seven Turkish regions will receive free training and information, hand in glove with a team Spanish journalists, directed by Indagando TV and expert consultants in an international cooperation.

The ab-bilgi.indagando.tv website, that it is possible to consult in English, Turkish and Spanish, it will be the framework for those who want to know the project and follow the information step by step, through different television programs, news, interviews and training sessions about the European Union.

In addition, the project will be presented through social media, with which links want to be created between journalists and experts in international projects. Those interested in this kind of information can be part of AB-Bilgi Facebook Group or in the list on Twitter to which different accounts of interest have joined. Also, the pictures are available in Flickr channel and the videos in Youtube.

The AB-Bilgi project is into the European Cooperation Program EuropeAid Dialogue for the Civil Society EU-Turkey III, Media (CSD-III/M). Its objective is to bring the EU policies to Turkey, but above all, it wants to approach Turkish journalists to the cooperation actions, development initiatives, European programs and the lines of the EU funding available to civil society to implement projects from the bottom up.

Considering the philosophy of the Civil Society Dialogue (CSD) program, the AB-Bilgi project promotes the cooperation networks, the exchange of good practices and experiences between the Turkish and Spanish civil society. And it is done through online communication, the television programs and training in European subjects.

2015-02-18
indagando
Previous: EU and Turkey Civil Society Dialogue III
Next: Turkey, Spain and Portugal Universities, together in an EU project for people with specials needs