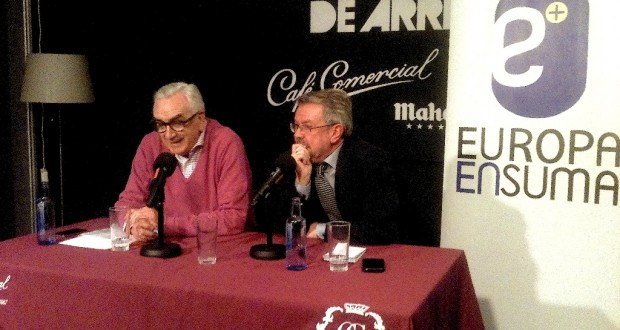 In the meeting The European Time, organized by “Europa en Suma”, Marcos Peña, President of the Economic and Social Council of Spain stressed that the economic crisis and the current population pyramid are forcing a rethink within the European policies that avoid imbalances between countries, between people themselves and achieve social cohesion, a pact between the state and society.

Science, education, health and pensions are the major challenges of the welfare state that currently has deficiencies. In the 2050 in Europe will live 45 million people over 65 and we will have 55 million fewer working age. For countries like Spain, the European contribution accounts for 3% of GDP.

In the picture, Marcos Peña, President of the Economic and Social Council of Spain and Juan Cuesta, EU expert journalist and President of “Europa en Suma”.

2015-03-15
indagando
Previous: AB-Bilgi training sessions will take place in seven Turkish cities on the second half of September
Next: Hüdayim Güler, journalist