Home » Press Releases » What do citizens know about European Union? 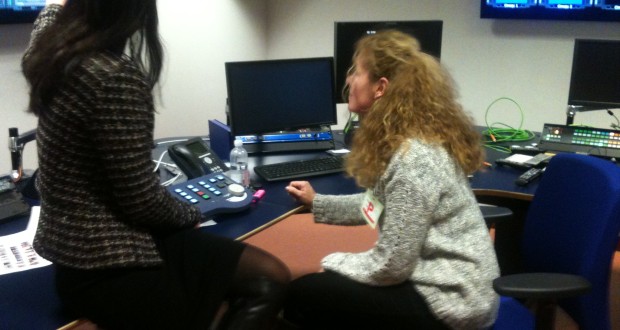 What do citizens know about European Union?

Indagando TV shows the key institutions of the European Union through a TV Programme. It is one of the main actions of AB-Bilgi Project, framed within EuropeAid programme.

“Discovering European Union” is a Turkish-Spanish coproduction, leaded by Turkish producer Ideyapim and the Spanish channel Indagando TV. A series of a 10 TV Programmes aimed at journalists, civil groups and Turkish civil society, the main objective is to increase knowledge about EU institutions and the opportunities that EU offers to take part on its programmes and projects.

Indagando TV has made a survey in the street and most of the people interviewed did not know which are the main institutions of the European Union, where they are and how they work, the number of the countries or which are in entry process, so “we spent the first program to explain how the EU works”, says Graziella Almendral, Indagando TV director.

The TV Programme includes the main numbers of the European Union: 28 countries without borders; more than 500 million people united by a kind of huge government, with some laws in common, others not and sharing a single currency, the Euro.

In addition, Indagando TV has made one of the last interviews given by Francisco Fonseca before leaving the direction of the European Commission in Spain, in which he tells the EU principles to be taken into account such as the democratic political criteria which highlights the equality between men and women, press freedom, human rights; the economic criteria is the adoption of a single currency and the technical criteria that allows to have rights and obligations in areas such as transport safety, consumption, medicines.

Turkey may become a member of the EU. Politicians have been working on this for years now. The first approach of a relationship between Turkey and the EU was in 1963 with a signature of an association agreement with the European Economic Community. In 1987 Turkey applied for membership and obtained the “Candidate State” in 1999 in Helsinki.

It was one of the first countries to become a member of the Council of Europe in 1949, and was also a founding member of the Organization for Economic Co-operation and Development (OECD) in 1961.

The EU and Turkey have to restart the formal accession negotiations – the 35 chapters of the EU law, known as the “acquis”, that Turkey must comply with before it is eligible to become a full member.

At this moment, Turkey continues its efforts to adopt EU “acquis” communitarian. Since 1999, a comprehensive transformation and reform process in line with the goal of EU accession has been underway in Turkey.

The TV Programme is hosted by Senhan Bolelli, a Turkish journalist, “I am going to accompany you through 10 television programmes to help Turkish and European journalists and citizens understand what this European Union thing is all about”, says.

“Discovering European Union” shows the essence of the European Union and in the coming programmes it will also look at the economic funds, the opportunities for Turkish citizens. Funds for education, science, the environment, information technologies, innovation…

INDAGANDO TV is an internet television channel dedicated to promote innovation, knowledge society and scientific and medical dissemination. Live broadcast television is directed to the general public. Their goal is to unite in the same media professionals of the technology, the environment, science, medicine, media communications, general public, scientific institutions, foundations and private companies.

2015-07-22
indagando
Previous: “Discovering European Union” – So similar, so different, so European
Next: Give us your opinion… Silvia de Félix