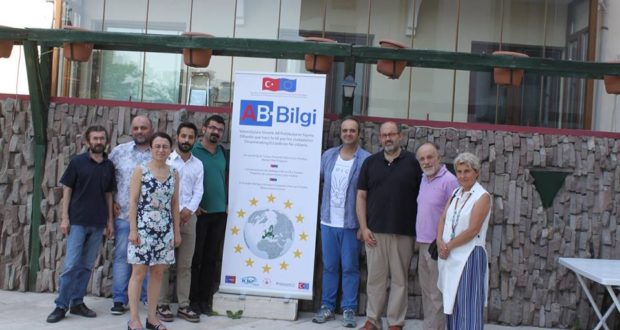 The AB-Bilgi program has carried out one of its main activities, training activities with which it has shown the resources that the European Union offers Turkish society, especially through programs and cooperation projects.

Between 18 and 26 July, consultants Santiago Algora (Spain) and Christos Georgiadis (Greece), both experts in funds and policies of the European Union, developed training sessions in the cities of Ankara, Bursa, Izmir, Adana, Diyarbakir, Erzurum and Trabzon. About a hundred people joined the sessions, including journalists and representatives of civil society.

As Santiago Algora explains, the number of journalists was lower than expected due to the large media interest that the political momentum generated in the country these days. Moreover, representatives of municipalities and universities were very numerous, as well as technical staff from chambers of commerce and NGOs. “A small part of the participants, specially the university population, known European funds, but were not aware of the possibilities offered to them so we talk about some funds with which they can start work”, he says.

Specifically, during the training, both consultants, Santiago and Christos, gave an overview of the main policies of the European Union and the concept of transnational cooperation, one of the pillars of EU action. They also described major funds and programs like Erasmus +, Horizon 2020, LIFE + or EuropeAID, accessible to countries that, like Turkey, are not yet part of the EU. One of the most important aspects of the training has been its practical approach to explain to participants how to present the projects and the criteria that the EU takes into account to select them.

2016-09-02
indagando
Previous: Give us your opinion… Macarena Quijada
Next: Climate change and his impact in the whole world